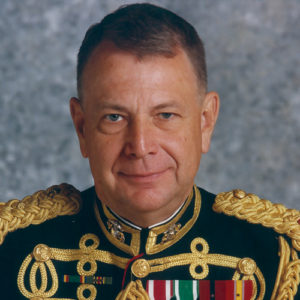 Lakeland, Florida (Dec 14, 2021) – The annual new release of the well-known Bourgeois Editions by Colonel John R. Bourgeois, a giant in the wind band genre, was announced by Wingert-Jones Publications just ahead of The 2021 Midwest Clinic.  The three new releases for wind band arranged by Col. Bourgeois are Maple Leaf Rag by Scott Joplin, Ballet of the Snowflakes from Le Voyage dans la Lune by Jacques Offenbach and Polonaise from Eugene Onegin by Peter Ilyich Tchaikovsky.

The distinguished career of Col. Bourgeois, the 25th director of the United States Marine Band, spanned nine presidential administrations, from Eisenhower to Clinton. He retired from the Marine Corps after serving as the band’s director and music advisor to the White House for 17 years.  Bourgeois has served as president of the John Philip Sousa Foundation, president of the National Band Association, and president and later chairman of the board of directors of the American Bandmasters Association. Since his retirement, he has continued to be extremely active as a guest conductor and clinician, artist in residence, and adjudicator for bands all over the world.

The Bourgeois Editions published by Wingert-Jones Publications, house a collection of edited masterworks, transcriptions and arrangements of well-known musical works.  Each work, beautifully engraved, has been carefully selected by Col. Bourgeois.  Using his experience as a conductor, John brings to each score a wealth of knowledge, invaluable to the wind band conductor.

Available from music retailers and from the publisher, Maple Leaf Rag is $60, Polonaise from “Eugene Onegin” is $70 and Ballet of the Snowflakes is $125.

About Wingert-Jones Publications:  Founded in 1964, Wingert-Jones Publications started as a labor of love between two instrument salesmen with a passion for grand, high-end band music. Merrill Jones started small, attending the 1964 National Band Clinic with just one piece: Emperata Overture by Claude T. Smith. Wingert-Jones has grown into a nationally known publisher and has expanded its library to include orchestral and educational works. The Achievement and Early Achievement music series are among the most popular hands-on music learning collections in the U.S.

Lakeland, Florida (October 14, 2021) – With its acquisition of Wingert-Jones and RBC Publications,…